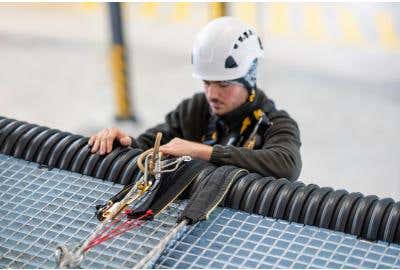 Falls are among the leading causes of worker deaths every year, especially in construction. Yet top 10 OSHA citations of 2016 has lack of fall protection first on the list; scaffold and ladder safety issues come in at third and seventh most frequently cited OSHA standards. Learn more about recent initiatives to increase fall protection awareness both in construction and general industries in this blog!

According to ALI’s press release, "reported incidents taken from the American Ladder Institute's 2016 research study showed the two most common causes of ladder accidents are overreaching and missing the last step when descending the ladder." said Ryan Moss, president of ALI and chief executive officer of Little Giant Ladder Systems. "These two common mistakes can be minimized with proper training. We recommend that those who use ladders at home and on the job are educated and trained on the proper use, care, and selection of ladders. We invite all to join us in embracing National Ladder Safety Month and get trained in the month of March."

In another effort to improve fall protection, OSHA recently revises the outdated general industry Walking-Working Surfaces and Fall Protection standards, adopted in 1971. The new rule, harmonized with OSHA’s existing construction industry standard and many ANSI standards, went into effect earlier this year to better protect workers in general industry from fall hazards. It eliminates existing mandate to use guardrails as primary fall protection method, to include additional fall protection systems that are more effective such as Personal Fall Arrest Systems (PFAS) or non-conventional fall protection in certain situations, such as designated areas on low-slope roofs. It also updates general industry standards addressing slips, trips, and falls (29 CFR part 1910, subpart D). OSHA stated that it will affect approximately 112 million workers at seven million work sites and is expected to prevent 29 fatalities and 5,842 lost-workday injuries annually. By May 17, 2017, employers must train affected workers on fall hazards and new equipment required by the final rule.